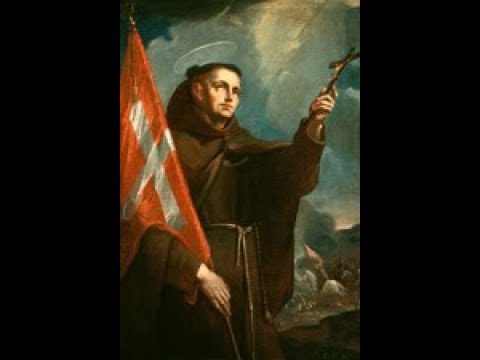 Be Not Afraid-Courage for the Modern World

This is my first venture into the blogging world-so please bare with me.  I started this blog to market my first writing and which I entitled, "The Ice is nice and Chee Chee is peachy".  This blog will also be useful in developing my two books I am working on entitled "Coffee with Christ" and "Be Not Afraid-Courage for the modern world".

Over 100 years ago Roald Amundsen on March 7, 1912 announced his success in reaching the Geographic South Pole to the world.  This is the story about the construction of the South Pole Station in Antarctica in 1973-4 by Naval Mobile Construction Battalion (NMCB71), also known as the ICE Battalion, which the author was a member of.  The difficulties encountered in the construction of the station were monumental; enduring temperatures reaching 45 degrees below zero with wind chill factors reaching 80 below.  This station was comprised of a 52 foot high geodesic dome, weather balloon launch station and an observation tower for monitoring auroral phenomena.  This Battalion was on the ICE for almost five months and worked around the clock to complete the project.  This was an amazing fact when you consider that most of the construction was completed in freezing temperatures at a high altitude; for the South Pole is nearly two miles high by construction engineers less than 20 years old.  The physical and mental stresses of working in this "frozen desert" took its tolls on these young men.  This story chronicles the authors experience in this hostile environment, with bawdy engineers; humorous antics; hard drinking and temporary insanities and the authors faith journey amid the beautify and grandeur of the earth's last frontier: Antarctica.   The title of the book is also the motto of the ICE Battalion—it refers to our mission and our R&R (rest and recreation) in Christchurch, New Zealand.
“THE ICE IS NICE AND CHEE-CHEE IS PEACHY”

It has been almost 40 years since I last stepped foot on the Continent of Antarctica.  It was a turning point in my life.  Since that day in early February 1974 I have never forgotten it.  I still continue as Lord Alfred Tennyson said, “To Strive, To Seek, To Find, and not to Yield.  After returning to Davisville R.I., I married my sweetheart and fathered seven children; two boys and five girls and I have four grandchildren.  Below are photos of my eldest son and grandson pointing at my name on the plaque we left at the South Pole.  It is now in the Seabee museum in Port Hueneme, California.  After the ICE, I spent three more years in the Navy and make a deployment to Bermuda with MCB 71 and was stationed afterward in Sigonella, Sicily.  I then joined the Army Military Police Corps.  I often would joke the Seabees taught me to steal and in the Army taught me how to catch a thief.  I eventually retired from the Army making the rank of Chief or Sergeant First Class.  I am a student of life.  I am a graduate from the University of Maryland and have a Master’s degree from Northern Arizona University and I am currently working on obtaining my Doctorate from Grand Canyon University.  I am an avid hiker and I currently live in the Sedona, Arizona area. 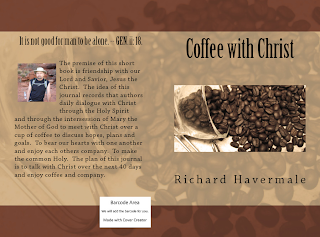 This book is available on amazon.com and my own webpage

I am also working on a longer project, "Be not afraid...here is an excerpt from the book


This book is based on more than 365 references in the Bible to fear, dread, and that in fact our God encourages us to “BE NOT AFRAID”.  There are many theologians who state that the eighth deadly sin is fear itself.  It is fear and its natural animal reaction to fight or flight that is the root cause of our failings to create a Kingdom of God on earth.


In fear or anger we walk away from God.  Our Lord, Jesus Christ taught us how to walk back toward God in His sermon on the mount through the Beatitudes.  Each beatitude is the antidote for each of the deadly sins.


Our Lord taught us to:


Be not Fearful but to have faith, BE NOT AFRAID and have courage.


Be not Prideful but be MEEK; not assuming and inherit the earth.


Be not Envious but be a COMFORT to your neighbor.


Be not Slothful but HUNGER & THRIST FOR RIGHTEOUSNESS.


Be not Angry but be patient and be a PEACEMAKER.


Be not Greedy but be MERCIFUL and show generosity.


Be not Gluttonous but be POOR IN SPIRIT; be a sacrifice for others.


Be not Lustful but be PURE OF HEART; your heart is for God alone.


In this book there is one chapter for each month of the year.  Each month will have a short monthly reflection and each day of the month will have a biblical quote on fear and a reflection.  The goal of this book is to give you courage to go make a difference and live the beatitudes with boldness and faith.

I have been inspired to write a blog rather than publish a new book as stated above on my reflections.  Below is a picture of the cover I was considering.  I am blogging the book because I think I can reach more people that way. 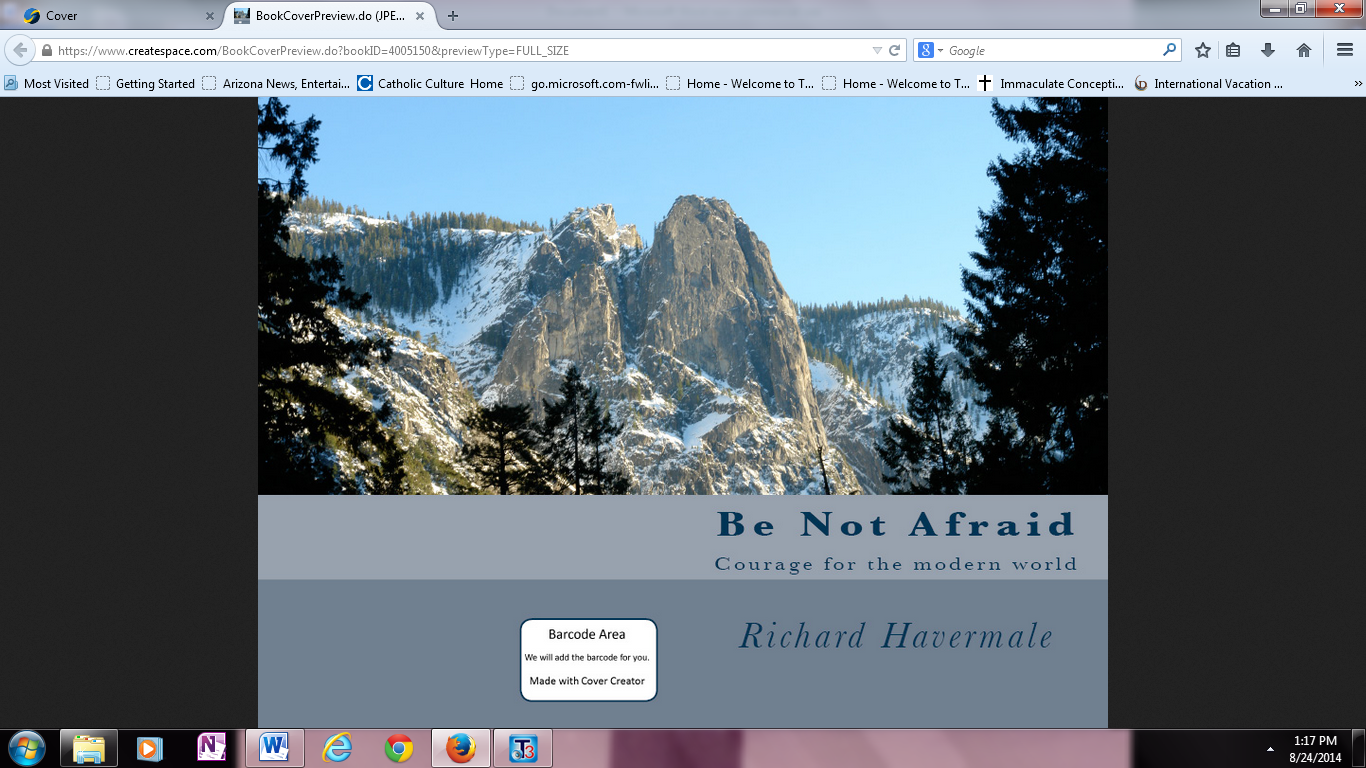 This blog is dedicated to Mary the Mother of God who is the model of courage in the modern world.


This blog is unique in that it will follow the Roman Catholic Church calendar and seasons.  Each season will have a short reflection and each day of the season will have a biblical quote on fear and a reflection.  The goal of this blog is to give you courage to go make a difference and live the beatitudes with boldness and faith in your daily life.

Note:  This series is merely the authors reflections of spiritual matters and may or may not be in accord with the magisterium of the Holy Roman Catholic Church. 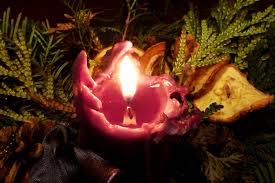 Advent is the beginning of the Catholic Churches liturgical year.  For many it is a time of great preparation for the Christmas holidays and often due to the commercialization of the season, it may also be a period of fear and loathing too.  Have we gotten all the gifts we needed?  Have we lived up to the expectations of our friends, colleagues and family?

The list of things to do, goes on, and we at times forget Advent is suppose to be a time of reflection, prayer, fasting and confession.  The true spirit of advent is to prepare oneself for the birth of Christ and to develop a spirit of generosity, respect, and wonder.  Thus, we will obey the promptings of the Holy Spirit rather than the world during this time of expectation and heightened anxiety.

The advent season is a four week time of reflection.  Encompassing the first, second, third and fourth Sundays of Advent celebrated in the months of November and December.  The third Sunday of Advent is called Gaudete Sunday and is a mini celebration of the season and a time to lighten the suffering.  If we fill ourselves during this time with courage we can rejoice in the suffering we receive for the glory of others in the circle of our life and Christ our King. 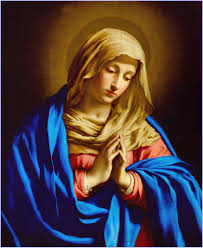 Mary is a perfect model of courage for us.  Church recognizes this in the celebration of Christ’s conception in the womb of Mary with the Feast of the Immaculate Conception on December 8.  We mark her courage of saying YES to God-knowing that being found with child while unmarried was the equivalent of a death sentence due to the laws and customs of her time.  Mary’s acceptance of God’s gift testifies to the greater law of God that states Life is greater than liberty or the pursuit of happiness.  Wisely the founders of our country recognized this by laying hold to this truth in the preamble of the US Constitution and stated laws are enacted to protect-Life, Liberty and the pursuit of happiness with life being first.