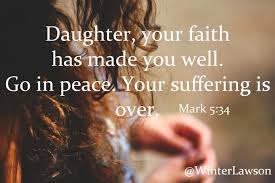 Mark, Chapter 5, Verse 33
The woman, realizing what had happened to her, approached in fear and trembling. She fell down before Jesus and told him the whole truth.

The woman in the chapter had suffered from a hemorrhage for twelve years and was ritually unclean by Jewish laws.

An unclean person in general had to avoid that which was holy and take steps to return to a state of cleanness. Uncleanness placed a person in a "dangerous" condition under threat of divine retribution, even death, if the person approached the sanctuary. Uncleanness could lead to expulsion of the land's inhabitants and its peril lingered upon those who did not undergo purification. Bodily discharges (blood for women, semen for men) represented a temporary loss of strength and life and movement toward death. Because decaying corpses discharged, so natural bodily discharges were reminders of sin and death. Physical imperfections representing a movement from "life" toward "death" moved a person ritually away from God who was associated with life. Purification rituals symbolized movement from death toward life and accordingly involved blood, the color red, and spring (lit. "living") water, all symbols of life.[1]

For you know the gracious act of our Lord Jesus Christ,
that though he was rich, for your sake he became poor,
so that by his poverty you might become rich. (2 Corinthians 8:9). Christ also being clean took this woman uncleanliness and gave her his Holiness. Indeed she was filled with wonder and awe.

This day emulate our Lord by reflecting and living the prayer of St. Francis.

The Prayer of Saint Francis

O divine Master, grant that I may not so much seek
To be consoled as to console,
To be understood as to understand,
To be loved as to love;
For it is in giving that we receive;
It is in pardoning that we are pardoned;
It is in dying to self that we are born to eternal life.