Video of the day

Mark, Chapter 12, Verse 12
They were seeking to arrest him, but they feared the crowd, for they realized that he had addressed the parable to them. So they left him and went away.

It is natural to fear something you cannot control. Christ could not be controlled by the men in charge of the Temple system; so they feared Him and they feared the crowd that followed Him. Christ’s message was good news to the crowd who were but pawns in the Jewish Temple system of wealth and power.

Yesterday we examined the effects of fear on the crowds in Rowanda at the time of the genocide. We can see that when rabid fear infects the masses and there is a shortage of righteous men utter chaos can follow.

We in times of trouble should be like Tobit and seek to walk all the days of our lives in paths of truth and righteousness. It was Tobit who defied those in power to do an act of mercy by burying the dead. While his neighbors mocked him and saying to one another:
“He is still not afraid! Once before he was hunted down for execution because of this very thing; yet now that he has scarcely escaped, here he is again burying the dead!” (Tobit 2:8) Love makes sacrifices. He (Christ) laid down His life for us. We should also lay down our live for our brothers. (1 John 3:16)
Most of us by the grace of God are never confronted with such terrors as Tobit and the Rwandan’s. Yet, we too in our quiet lives can lay down ourselves in service to our brothers.
John McCain in his book Character is Destiny[1] highlights the life of John Wooden who in his own quiet way as a Basketball coach made a huge difference in countless lives of young men growing up teaching them the power of COOPERATION.
Coach Wooden was a modest man who inspired young men under his tutelage, leading by example; teaching them wisdom and decency to become both winners and good men.
McCain states Wooden:
He cared about his players, and paid strict attention to teaching them the small and big things that would help them become the best basketball players they could be, and, most important, the best men they could be. He would bench a player for using profanity or for criticizing a teammate or for treating an opponent disrespectfully. He expected his players to dress appropriately, be courteous to everyone, acknowledge their other teammates when they scored, and to refrain from showing excessive emotions on the court. He taught them dignity, based, as dignity is, on self-respect and respect for others. And he taught them not only the usefulness of teamwork, five men all playing their assigned roles, but the virtue of cooperation, and the sense of satisfaction it provided to an individual.
Coach Wooden taught that success is, “peace of mind that is the direct result of self-satisfaction in knowing you did your best to become the best that you are capable of becoming.” Coach Wooden developed a Pyramid of Success which he taught his players which not only help them win at the game of basketball but also in the game of life.
[1] McCain, John and Salter, Mark. (2005) Character is destiny. Random House, New York 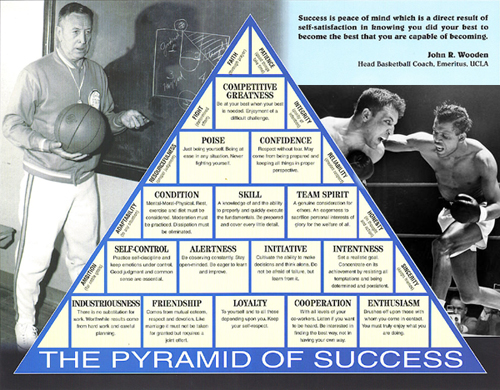