SAINT MOTHER THEODORE GUERIN 2 Maccabees, Chapter 15, Verse 18 They were not so much concerned about wives and children, or family an...

Christ may have been referring to the rabbinic duality of yetzer hara, the so-called "evil inclination," and the yetzer hatov, the "good inclination,". Yetzer hara is not a demonic force that pushes a person to do evil, but rather a drive toward pleasure or property or security, which if left unlimited, can lead to evil (cf. Genesis Rabbah 9:7). When a person’s will is properly controlled by the yetzer hatov, the yetzer hara leads too many socially desirable results, including marriage, business, and community. In Judaism adults are distinguished from children by the yetzer hatov, which controls and channels the drives that exist unchecked in the child. Thus children may seek pleasure and acquisition, but they are not able to create a sanctified relationship or exercise the responsibility to engage in business. The young adult is not described as someone who has developed a sophisticated moral sense; in fact, the early adolescent may base moral decisions entirely on fear of punishment. Yet by age 13, the child’s moral sense has developed sufficiently to hold the child responsible for his or her actions.[1]
Another Jewish source states:


ha-Satan, the Adversary, was one of the “severe” agents of God. Another such harsh but necessary force in God’s creation is the Yetzer ha-Ra, which is variously translated as the “Evil Impulse,” the “Evil Desire,” the “Selfish Desire” or just “Desire.” It is that aspect of nature, but especially human nature, which drives us to compete, to fight, to possess, but most of all to desire sexual gratification. Though it is counter-balanced by the Yetzer ha-Tov, the “altruistic desire,” it is nonetheless the source of much of the grief in human life – lust, violence, selfishness, vengeance, and ambition. One would think that humanity would be truly better off if we could destroy this impulse. We see evil in ourselves, it offends us, and we think the right thing to do is to totally purge ourselves of it. Yet we don’t truly understand it, for things we so easily characterize as “evil” actually spring out of the very nexus of holiness. Surreal as it is, this maaseh makes an incredible point – it is the strife of the spirit, the very struggle between our impulses that makes the world work. Without the Yetzer ha-Ra, the world as we know would cease – people [and animals] would no longer be driven to build, to create, to have children. In short, life as we know, including not only evil aspects but most of what we regard as beautiful also, would cease. Without Desire, Life itself would slowly wither away, and that would be a sad thing. So the goal of the spiritual person is not to destroy the selfish-sexual-evil impulse, but rather to sublimate it to God’s purpose. To be truly what God wants us to be, to achieve our fullest human potential, we need to learn to bend both our impulses to godly ends. We should not cease to lust, but should direct that urge toward love. We should turn our impulse toward vengeance into the desire for justice, our ambition for acquiring possessions into the creation of true wealth.[2] 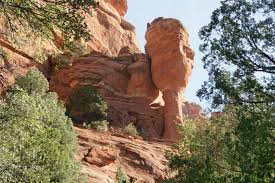 I would like to focus on the word desire.  I like to hike and pray.  One day I was hiking in the Fay Canyon area of Sedona, Arizona and I was reflecting on the seven deadly sins and the opposing virtues of our Lord sermon on the mount.  As I was hiking and musing over the words that are associated with the deadly sin of lust: such words as long for, hanker for, hunger for, yearn, crave, and desire.  In my mind I repeated desire, desire, desire and I asked our Lord what do you want me to desire?  As I asked that question I looked up at the canyon and spied a rock formation in the shape of a chalice.  Yes Lord, I exclaimed.  I shall desire to receive you in the Holy Mass.

In the end perhaps our Lord is asking us to develop our evil desires into Holy Desires and He does this by infusing Himself into our very being through the Holy Mass thus overcoming evil with good.