Then Jotham fled and escaped to Beer, where he remained for fear of his brother Abimelech.


A lot of people seem to escape to Beer! That’s a joke but unfortunately it is a common response to fear. Liquid courage we use to call it in the military. However, today I would like to change the subject to that of the family.

Jotham was raised in a large family 70 brothers and we do not know how many sisters. Families are the breeding ground of either love or hate; of either evil or good and finally of either excellence or apathy. A great family whether large or small is the seedbed of either greatness or smallness. This is the reason there is such a focus on the family in the church now. Families are the factories of a person’s character and character determines a person’s destiny which leads us back the study of John McCain’s book, Character is Destiny"[1] 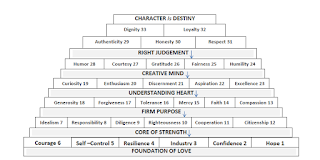 Today we will be examining the life of Wilma Rudolph who was one of the fastest women on earth and is John McCain’s example for the characteristic of excellence. It is good to reflect that excellence is not achieved alone Wilma achieve greatness because of the love and support of her family and because of the creativity of herself and her family. Having a creative mind is essential to making right judgments which will be the next step up in our study of character. Now would be a good time to review our progress so far and realize that for one to have a creative mind they must first be curious (Darwin), enthusiastic (Roosevelt); discerning (da Vinci), and filled with aspiration (Magellan) are essential to come to excellence.

McCain states that Wilma Rudolph:
Survived poverty, racism, and polio to become the fastest woman on earth and was known to journalists as La Gazelle Noire, the Black Gazelle and go on to win a gold medal in the 1960 Olympics.
Blanche and Eddie Rudolph had already welcomed nineteen children into the world when little Wilma arrived on June 23, 1940, two months ahead of schedule. Blanche had fallen down and almost immediately gone into labor. Weighing a little over four pounds at birth, Wilma Glodean Rudolph wasn’t expected to live long. That the newborn survived those first perilous weeks was an early indication of the strength she would employ to see herself safely through the many crises of her childhood. Blanche and Eddie were extraordinary parents, hardworking and devoted to their children. But with twenty-two children (two more were born after Wilma), and each parent holding more than one job, Eddie as a railroad porter and handyman, Blanche a laundress and housekeeper, it was hard to give much attention to any individual child. Wilma would need a lot of attention, and would have little prospect of finding much help outside her family. The family’s poverty and the injustices of the segregated South offered scant encouragement to the Rudolph’s as they looked to their community in rural Clarksville, Tennessee, for the care that their lively but chronically ill daughter needed. But they did the best they could; for as poor as they were, they were rich in virtue, and gave their struggling child the love and encouragement she needed to believe she might one day be a healthy, happy little girl. Wilma suffered measles, mumps, chicken pox, and the whooping cough before she was four years old. Colds and the flu constantly plagued her. She spent most of her early childhood in bed. Shortly before her fifth birthday, Wilma became very sick with scarlet fever and pneumonia in both her lungs. Again, she was not expected to survive. Her family covered her in blankets, plied her with the usual remedies, comforted her, and prayed. But the illness persisted. Even as the crisis began to abate, a strange symptom occurred that caused her worried family even greater alarm. Wilma’s left leg began to twist to one side. When her parents encouraged her to move it, she told them she couldn’t. The doctor was called, and after examining her briefly, he informed Eddie and Blanche that their daughter had been stricken with polio, for which there was then no known cure. If she survived, he warned them, she would never walk again. But walk she did. Her family saved her. Their constant encouragement and care helped Wilma to overcome her despair, and summon such a great quantity of strength and courage, and an almost superhuman power of concentration, that she would in time become known as their miracle child. She attributed those qualities to the great fortune of having a loving family. “The doctors told me I would never walk,” she wrote in her autobiography, “but my mother told me I would, so I believed my mother.” One day, as Wilma felt the onset of another illness, she decided she would begin to fight. “Enough! No more taking everything that comes along, no more drifting off, no more wondering.”
During the long years of her rehabilitation, when few outside her family ever believed that day would come, Wilma had developed into a young girl with extraordinary reserves of strength, and had learned to pursue goals that were beyond the reach of most people with a tremendous intensity of resolve and concentration. She was not just a normal, healthy kid. She was special, and she knew it. Now that she had beat the odds and learned to walk again, she decided to focus her formidable strength on becoming an athlete. There are four things necessary to excel at a sport, or anything, for that matter: skill, concentration, willingness to struggle, and love. When she was only sixteen, she made the American women’s track and field team in the 1956 Olympic Games, which were held in Melbourne, Australia. Then in 1960, she was the first American woman to win three gold medals. And she was, beyond dispute, the fastest woman on earth. The girl had beaten polio, poverty, and racism to become the greatest female athlete of her time, and one of the most beloved people in the world.

One wonders how many other Wilma's have been lost to history by the evil of abortion?

Novena to the Holy Face from Wed. Sep 30th to Thu. Oct 8th and do the 1st Friday devotion in the morning