Sirach, Chapter 34, Verse 14-17
14 Living is the spirit of those who fear the Lord, 15 for their hope is in their savior. 16 Whoever fear the Lord are afraid of nothing and are never discouraged, for he is their hope. 17 Happy the soul that fears the Lord!

Let His light radiate through you. Do not let modern living dissuade you from having a spirit of kindness which is displayed in those who exude grace and courtesy. Our newspapers, favorite reality shows, twitters and tweets and politicians, all continually show us the proper response to anyone not seeing things the way they do is to be rude, crude and socially unacceptable.

God's grace is in courtesy, the devil's disgrace lurks in discourtesy According to the author of Piers Plowman, discourtesy will be one of the marks of Antichrist. William Langland prophesied a terrible falling away from Christ and his Church, and the sign of that apostasy would be discourtesy. Intellectual arrogance would lead men into infidelity to Holy Mother Church, contempt for the little and weak, and depravity of morals--in a word, into what Scripture calls "the pride of life," the deadly opposite of courtesy.[1] 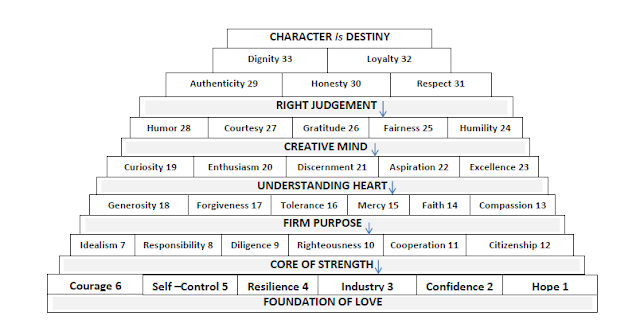 John McCain in his book “Character is Destiny”[2] highlights the life of Aung San Suu Kyi, who was the Burmese wife of an Oxford professor who came home to free her people, and oppose the political tyrants who jailed her with courage and decency and yet despite her mistreatment is for us a modern example of courtesy.

Aung San Suu Kyi returned to Burma in 1988, after years of living and studying abroad, only to find widespread slaughter of protesters rallying against the brutal rule of dictator U Ne Win. She spoke out against him and initiated a nonviolent movement toward achieving democracy and human rights. In 1989, the government placed Suu Kyi under house arrest, and she spent 15 of the next 21 years in custody. In 1991, her ongoing efforts won her the Nobel Prize for Peace, and she was finally released from house arrest in November 2010. She has since gained a parliamentary seat with the National League for Democracy party.[3]

In Burma, courtesy is a rebellious gesture to a ruling elite that has tried to terrorize such refined kindness from their culture, and make a world where only power matters, where there are only the fearsome and the fearful. Suu, as she asks Western visitors to call her, never reciprocates discourtesy. She is a practicing Buddhist who refuses to hate those who hate her because, she says, she cannot fear what she doesn’t hate. In a statement she had smuggled to the press, she explained her steady, almost cheerful resistance to the regime’s attempts to frighten her. “It is not power that corrupts but fear,” she wrote. “Fear of losing power corrupts those who wield it, and fear of the scourge of power corrupts those who are subject to it.” She remained unmoved. (One must never mistake her good manners and delicate beauty for a lack of will and strength.) She was willing, as always, to show her persecutors every courtesy and to entertain a polite willingness to consider their concerns as they discussed the future of their country. “Confrontation,” she told a Time magazine reporter, “comes about because there is no other way to settle differences. If there is a channel open for settling differences, there should be no need for confrontation.” And when she was asked how cruelly she had been treated by the regime, she responded, “I have never been treated cruelly.” But the regime, the bullies who are destroying the country and are so afraid of this one small woman and her implacable determination, would not acquiesce to any plan that might result in their long-overdue loss of power. Recently, reports have surfaced that the tyrants are again considering the release of Burma’s national heroine. Perhaps they will soon knock at the door of her home again. I have no doubt that when they do she will receive them with perfect courtesy, not that they deserve it. But she does not extend her courtesy as a sign of respect for them or their power, but to show, yet again, that they cannot make her become the only type of person they understand, one of the fearful or one of the fearsome. She is merely, steadfastly, reaching out to beauty to banish ugliness from her sight and the lives of her countrymen.

It might sound odd that during the period of "Carnival" there occurs some of the most decadent feasting of the liturgical year. There is, however, a pious (if not somewhat convoluted) logic behind this consumption. Because not only meat but lacticinia (dairy products) were originally prohibited during Lent, Christians knew that they had to eat these foods before Ash Wednesday or they would spoil. The last days before Lent were thus spent in eating copious amounts of fat dishes. From this necessity comes England's famous Shrove Tuesday Pancakes and northern England's Collop Monday (a collop is made of sliced meat and eggs fried in butter). This also gave rise to the most famous (or infamous, depending on your point of view) Christian party of all: Mardi Gras. Mardi Gras, or "Fat Tuesday," is the French celebration of the final day before Lent. In this country it is associated mostly with the Cajun and Creole cuisine of New Orleans, two culinary traditions that provide a myriad of spicy, delicious dishes. One of the
more interesting customs of the New Orleans Mardi Gras is the baking of a King's Cake, in which is placed a small doll of the Infant Jesus. The person whose piece of cake has the doll must provide the cake for next year's party.

Because the Shrovetide celebrations became prone to excess and scandal, Pope Benedict XIV instituted in 1748 the Forty Hours of Carnival, especially in those areas prone to such reveling. During this devotion the Blessed Sacrament is exposed during the day and Benediction held in the evening.

NOVENA TO THE HOLY FACE

O Most Holy and Blessed Trinity, through the intercession of Holy Mary, whose soul was pierced through by a sword of sorrow at the sight of the passion of her Divine Son, we ask your help in making a perfect Novena of reparation with Jesus, united with all His sorrows, love and total abandonment.

We now implore all the Angels and Saints to intercede for us as we pray this Holy Novena to the Most Holy Face of Jesus and for the glory of the most Holy Trinity, Father, Son and Holy Spirit. Amen.

Psalm 51, 8-9.
Indeed you love truth in the heart; then in the secret of my heart teach me Wisdom. O purify me, then I shall be clean; O wash me, I shall be whiter than snow.

O Lord Jesus, who has said, learn of me for I am meek and gentle of heart, and who did manifest upon Thy Holy Face the sentiments of Thy divine heart, grant that we may love to come frequently and meditate upon Thy divine features. We may read there Thy gentleness and Thy humility, and learn how to form our hearts in the practice of these two virtues which Thou desires to see shine in Thy servants. Mary our Mother and Saint Joseph help us.

Through the merits of Thy precious blood and your Holy Face, O Jesus, grant us our petition, Pardon and Mercy.

Prayer in Honor of the Dolors of the Blessed Virgin

O Most Holy and afflicted Virgin, Queen of Martyrs! Who stood beneath the cross, witnessing the agony of your dying Son, look down with a mother’s tenderness and pity on us as we kneel before you to venerate your Dolors, and place our requests, with filial confidence, in the sanctuary of your wounded heart. Present them on our behalf to Jesus, through the merits of His most sacred Passion and Death, together with your sufferings at the foot of the cross, and through the united efficacy of both, obtain the favor which we humbly ask. To whom shall we go in our wants and miseries if not to you. O Mother of Mercy, who having so deeply drunk of the chalice of your Son, graciously alleviate the sufferings of those who still sigh in this land of exile. Amen.

Prayer to the Souls in Purgatory

My Jesus, by the sorrows you suffered in your agony in the garden, in your scourging and crowning with thorns, in the way to Calvary, in your crucifixion and death, have mercy on the souls in Purgatory, and especially on those that are most forsaken. Deliver them from the dire torments they endure. Call them and admit them to your most sweet embrace in Paradise. Amen.

The Kingdom of God is at hand; repent and believe in the Gospel. Mk. 1:15