Acts, Chapter 16, Verse 19
When her owners saw that their hope of profit was gone, they seized Paul and Silas and dragged them to the public square before the local authorities.

The “her” in this verse is a slave who was possessed by a spirit of divination: she had the power of fortune-telling. Paul had commanded that the spirit release her in the name of Christ and she was now worthless to her owners. Do you think things have changed; do we still have owners of fortune tellers who are trying to suppress the truth? Consider the state of our modern journalists and spinsters is their work closer to truth or fortune telling?

SAINT MARTIN[1] was born in the year 316 in Pannonia, or Hungary, of pagan parents, but he received secret instructions in the Christian religion, and in his tenth year was received into the number of the catechumens, that is, of those who are preparing themselves to receive holy Baptism. At the age of fifteen he became a soldier, being, as is probable, forced to do so by his father, to whom the religion of the boy had become known. Out of love of God he not only kept himself aloof from the excesses so common in this state of life, but he took advantage of it to practice love for man, by dividing his pay among the poor. Being one day solicited for alms by a beggar, and having nothing but his arms and his cloak, he gave him half his cloak. The following night Christ appeared to him, wearing that half of the cloak, and said to him: Martin, who is yet a catechumen, has clothed Me with this garment. Moved by this comforting apparition, he received holy Baptism, gave up the life of a soldier, and betook himself to St. Hilary, Bishop of Poitiers, in France. As he was careful for his own salvation, so also was he careful of the salvation of others, particularly of his parents and relatives, for the sake of whose conversion he undertook a journey to his native land. On his return he built, not far from Poitiers, the first convent in France, into which he received twenty-four monks, with whom he led a strict and virtuous life. His great faith made him like the apostles in regard to miracles, and the fame thereof spread abroad to that degree that, in spite of his refusals, he was chosen Bishop of Tours. This high dignity made no change in his manner of living; rather it increased his humility, his patience under the greatest persecutions, his zeal for the glory of God, his love for his neighbor, and particularly for his enemies. After he had in such manner ruled over his diocese for twenty-six years, being then over eighty years old, the strength of life left him. He thereupon collected his disciples about him, and said: Children, I am dying. They wept and mourned. Moved by their tears, he in his prayers professed himself willing to labor longer if it were God's will. But he had labored for heaven enough, and God desired to place upon him the long-merited crown. With his eyes raised to heaven, he prayed incessantly, allowing himself no relief. At his last moments the enemy sought to confound him by a horrible apparition, but, full of confidence in God, the saint cried out: What do you seek, cruel monster? In me you will find nothing that is yours; and soon after his spirit gently sank to rest. Would that we might learn from this saint truly to love God, and to care not only for our own salvation, but for the welfare of our fellow-men in body and soul! Then we, too, might have nothing to fear in death.

In honor of St. Martin today would be a good day to go through our closets and cut our cloaks in half to donate to the poor.

While serving in Germany myself I have a fond memory of St. Martin Day in which my children participated in the nightime St. Martins Day Parade in the small town of Gersbach, Germany.

On St. Martin's Day, children in Flanders, the southern and north-western parts of the Netherlands, and the Catholic areas of Germany and Austria still participate in paper lantern processions. Often, a man dressed as St. Martin rides on a horse in front of the procession. The children sing songs about St. Martin and about their lanterns. The food traditionally eaten on the day is goose, a rich bird. According to legend, Martin was reluctant to become bishop, which is why he hid in a stable filled with geese. The noise made by the geese betrayed his location to the people who were looking for him. 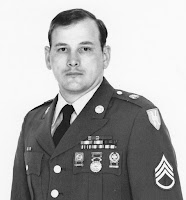 Veterans Day seeks to honor and give thanks to all the men and women who have served and are
serving in the US Armed Forces.  Ceremonies are held across the country at Veterans Hospitals, cemeteries, and National Monuments.  At 11:00 a.m. EST, the Veterans Day National Ceremony is held at Arlington National Cemetery.  At this ceremony the President of the United States, or his assigned ambassador, places a wreath on the Tomb of the Unknown Soldier.  Veterans Day is observed on November 11th each year.

Veterans Day Top Events and Things to Do

COURAGE FOR THE MODERN WORLD 2017