Saturday of the Seventh Week of Easter ST. RITA OF CASSIA-BIO Day   Daniel, Chapter 3, Verse 90 Bless the God of gods, all you who...

2 Chronicles, Chapter 19, Verse 5-7
5 He appointed judges in the land, in all the fortified cities of Judah, city by city, 6 and he said to them: “Take care what you do, for the judgment you give is not human but divine; for when it comes to judgment God will be with you.7 and now, let the fear of the LORD be upon you. Act carefully, for with the LORD, our God, there is no injustice, no partiality, no bribe-taking.”

This was Jehoshaphat said to the judges that he was appointing. Reform always includes justice. The Holy Spirit calls us to be just and merciful to human needs. Today pray for those who are in need and may not ask for help. Today, look for and act to address the real needs of all humans.

A team of researchers at Arizona State University, led by evolutionary psychologist Douglas Kenrick, has noticed that most people really like being parents.  Despite the challenges of child-rearing, Kenrick reported that the warmth, the love, the creativity, the sense of purpose and belonging—all of these factors and more make parenting the most enjoyable of all activities. Kenrick’s team reported this breaking news, which is just a ho-hum factoid to loving parents, in the journal Perspectives on Psychological Science.  Kenrick and his group proposed a revision to Abraham Maslow’s Hierarchy of Needs which takes into account our deepest biological drives. In the new Need Hierarchy, Maslow’s fifth-tier need Self-Actualization has been supplanted at the top by a motivation which Maslow hadn’t even mentioned:  Parenting.

What Is Maslow’s Hierarchy of Needs….and Do I Need It?

In my undergraduate days at the University of Michigan, the darling of the Psych Department was Abraham Maslow.  A psychologist and motivational researcher, Maslow believed that humans’ most basic needs are inborn; and he developed his acclaimed Hierarchy of Needs in the 1950s to explain how these needs motivate us all.  According to Maslow, our most basic needs for survival (food, water and shelter) must be satisfied before we can turn our attention to higher-level needs such as influence and personal development.  If there is a threat to our lower-level needs (a house fire, for example, or job loss or nationwide famine), we will no longer be concerned about higher-level needs but will instead focus on rebuilding the base of security that we require. 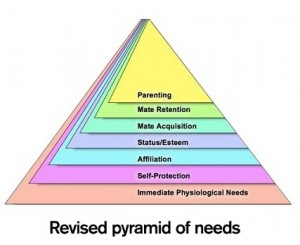 In the 1970s, behavioral scientists slipped in two additional categories after Esteem needs:
And in the 1990s, scientists took one more step toward a benevolent view of Need Hierarchy by topping Self-Actualization with an even higher need, the need for Transcendence.  Once an individual achieved personal potential (Self-Actualization), scientists claimed, he or she would then seek Transcendence by helping another to achieve Self-Actualization—for example, through volunteer work in a disadvantaged community. What has emerged now, though—based on research studies conducted in 2010—is a new understanding that devoted parents find the deepest satisfaction in shaping the hearts and souls of the children who have been entrusted to their care. While non-parenting adults may expect the rigors of child-rearing to be an impediment to happiness, the opposite is true:  Those who have actually experienced the joy of giving selflessly to a helpless infant achieve a level of wellbeing that is unmatched in human experience.  Those who patiently teach a toddler to tie her shoes, or help a middle schooler to make friends in the classroom, report greater satisfaction than do those whose focus is personal fulfillment through career, marriage or other adult relationship. Next in the pyramid, according to Kenrick and team, is Mate Retention– a marriage which lasts– and before that comes Mate Attraction (finding that special person).  It would appear that all of our deepest longings derive from the complex biological urge to reproduce.

Rogation Days are a Roman Catholic "baptism" of the Robigalia, a pagan procession to gain favor from the Robigo, the Roman god of grain. Since the Church had no objection to praying for the harvest, it threw out Robigo while keeping the procession and prayers. Today would be a good day to reflect on what we want to harvest this fall; so like farmers we must till the soil of our soul reflecting this day on our use of our TIME and look at in what ways we may offer our time to Christ to help build a harvest for His Kingdom.

The International Day for Biological Diversity aims to raise awareness and understanding of biological diversity and issues surrounding it. The day also serves to highlight possible strategies to protect biodiversity, which refers to the variety of life on the planet. Today, habitats are degrading and leading to a reduction in biodiversity, a problem that directly affects human well-being, poverty reduction and global sustainable development. The International Day for Biological Diversity was proclaimed in December of 2000 by the United Nations General Assembly. It is celebrated annually on May 22, a day that commemorates the adoption of the Convention on Biological Diversity in 1992.

·         The 2016 theme for the day of International Biodiversity Day was Mainstreaming Biodiversity; Sustaining People and their Livelihoods.
·         According to the UN, more than 3 billion people depend on marine and coastal biodiversity for their livelihoods and 1.6 billion people rely on forests and non-timber forest products for their livelihoods.
·         Habitat degradation and the loss of biodiversity are currently threatening the livelihood of over 1 billion people who live in dry and subhumid climates.
·         Over 50% of the world’s plant species and 42% of all terrestrial vertebrate species are native to a specific country and do not naturally exist elsewhere.
·         We should preserve every scrap of biodiversity as priceless while we learn to use it and come to understand what it means to humanity. – E. O. Wilson, American biologist, researcher, theorist and author.

International Day for Biological Diversity Top Events and Things to Do

·         Watch a movie or documentary on the importance and irreplaceability of the world’s biodiversity. Some suggestions are: The Cove, Oceans, Plastic Planet and the 11th hour.
·         Spread awareness on social media by using the hashtags #InternationalDayForBiologicalDiversity, #IDBD and #BiologicalDiversity.
·         Join the international Day for Biological Diversity Google Hangout where you can video stream yourself and with other people to discuss biological diversity with like-minded individuals.
·         Organize or participate in a local cleanup effort. Biodiversity is very negatively impacted by human trash and pollution.
·         Donate to the center for biological diversity. All funds are put towards securing a future for all species hovering on the brink of extinction with a focus on protecting lands, waters and climate that species need to survive. Consider funds like WWF, the Animal Project and Defenders of Wildlife.

Why should Catholics care? The Church’s social teaching calls on Catholics to uphold the life and dignity of every human person, to be in solidarity with our brothers and sisters worldwide, and to care for God’s creation. Since the extraction of oil, gas, minerals, and timber affects the poor most acutely, the Church has been addressing issues related to extractive industries around the world. Catholic agencies and affected people have been engaged in advocacy with their own governments, international financial institutions, and extractives companies, urging them to become more transparent, to reduce the negative impacts of resource extraction on people and the environment, and to increase benefits for the poor most especially. In the U.S. bishops’ first statement on environmental matters, renewing the Earth (1991), they draw attention to the ethical dimensions of the ecological crisis, exploring the link between ecology and poverty and the implications for human life and dignity. Bishops of every part of the world have expressed concern regarding extractive industries. Indeed, Pope Benedict XVI, expanding on the issue of the environment in Caritas in Veritate, stated: Let us hope that the international community and individual governments will succeed in countering harmful ways of treating the environment. It is likewise incumbent upon the competent authorities to make every effort to ensure that the economic and social costs of using up shared environmental resources are recognized with transparency and fully borne by those who incur them, not by other peoples or future generations: the protection of the environment, of resources and of the climate obliges all international leaders to act jointly and to show a readiness to work in good faith, respecting the law and promoting solidarity with the weakest regions of the planet (No. 50).[4]