DAY 44 - MARY, QUEEN OF ALL SAINTS, PRAY FOR US The Warrior Ethos The Soldier's Creed of the United States Army states: "I am dis...

One Nation Under God

We Are Facing Our Lepanto 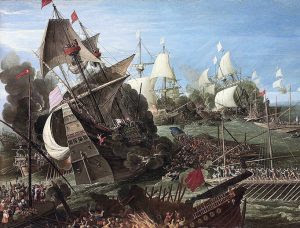 Thursday, October 7, marks the 450th anniversary of the Battle of Lepanto and the Feast of Our Lady of the Rosary. That battle, 450 years ago, witnessed the "underdog" Christian alliance claim victory because they stood their ground as an "Under God" united force.
Christianity had become "weak and divided." The Ottoman Turks felt this was the perfect time to storm in and "deal the last blow." Facing this make or break moment, Pope Pius V discerned it was time to "unite and pray." Under the command of Don John of Austria, the remnant armies were gathered into one Holy Alliance nicknamed the "Holy League." Pope Pius V then got the word out to as much of the world as he could to ask for "prayer support," especially to petition the intercession of the Blessed Virgin Mary through the recitation of the Rosary.
Although greatly outnumbered, the Holy League famously defeated the Ottomans at the Battle of Lepanto in 1571. Pope Pius V attributed the victory to the intercession of the Blessed Virgin Mary and instituted the feast of Our Lady of Victory (later named, "Our Lady of the Rosary"). Fr, Steve Grunow went as far to say, "This victory would severely curtail attempts by the Ottoman Empire to control the Mediterranean, causing a seismic shift in international relations from East to West. In some respects, and I do not want this claim to be overstated, the world that we know came into being with this victory."
Today, a seismic shift, for the good or for the bad, is in the offing, or what is called a "watershed moment." A watershed moment is a turning point, the exact moment that changes the direction of a situation. We are now facing a historically powerful radical secular tyranny - media, Hollywood, Big Tech, government, universities, etc. - that has joined forces and is now aggressively advancing to seize absolute power and control; to "deal the last blow." Why? Because, as it was 450 years ago, Christianity is "weak and divided."

Quo Vadis, America? (Where are You Going, America?)

Archbishop Fulton Sheen, in this monumental video below, identifies this new type of "tyranny by violence" that is sweeping across our country. Sheen says this is manifested as "elitism." According to Sheen, "there is a dominant minority that makes a lot of noise, and that uses 'violence' to FORCE IT'S WILL UPON OTHERS!" It is also identified as "mysticism." This is a "political mysticism." A political mysticism starts with the belief that there is no God, and then demands, "It's my will or nothing!" This is the "dogma" of this new radical secular religion, and they will bully you into compliance. The third characteristic of this violent tyranny is "Satanism." Sheen states, "Order and harmony come from God, so the essence of Satanism is the destruction of that order. The destruction of the order of law, the order of morality, the order of religion, the order of ethics ... anything that you please."
Sheen concludes by appealing to all of us in his raised voice, "Our nation is too full of those that are crying Down. Down with the universities. Down with schools. Down with the churches. Down with teachers. Down with government. Down with the police. Can you build anything down? You cannot! Certainly it is time in our nation to change our words! Let's begin now to use the word UP. Up from all of this filth! Up from this violence! Up from this indifference of courts. Up, up to the battlements of eternity. Up, Up, to God!" Please watch this short historical video! (below) 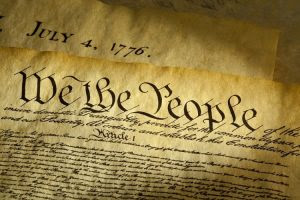 Here we are on the anniversary of our nation's own liberation: 4th of July or Independence Day. We celebrate being liberated from oppressive tyrannical forces. So that, now, we boldly proclaim that this is the "land of the free and the home of the brave."
However, justifiably, so many worry that we are facing a new great oppression of violent tyrannical forces. We are, as Sheen warns, being oppressed by satanic forces, seen and unseen. And so, we must deploy the very best tactics used by exorcists for those who are under satanic oppression.
God is calling YOU to step up as His "Supernatural Hero" to expel demons and liberate America! Exorcists will, first, identify the demonic spirits and then pray certain exorcism prayers to seek this liberation. Once liberation has occurred, exorcists will guide and form those once oppressed in how to seek protection and blessing from that day forward. This is the approach we are taking to stand up and seek liberation from our country's satanic tyrannical oppressors. Our battle cry is the same of every hero willing to fight for our freedom ...

July 7 - August 15 - Let Freedom Ring: A 40-Day Tactical Training for Freedom from the Devil
This is the "exorcism" part of our three month long prayer campaign. This July 7 marks the one-year anniversary when nearly 77,000 special forces prayer warriors "UNITED" as the "United States Grace Force," to pray together for this liberation from demonic forces in our culture. Since then, this tactical training has been made available in book form, and is seeing really nice reviews. We prayed together again as 77,000 during this past Lent. People can make their own assessment, but we witnessed the violence in our streets begin to abate during our first prayer campaign in 2020. Then, this year, we witnessed a weakening, along with many missteps, from the radical secular tyranny looking to seize power and control. Exorcists rarely see liberation in their first attempts. They remain relentless, until liberation occurs. Let's be relentless too.
Enlist in the United States Grace Force to receive all of the daily "Let Freedom Ring" prayers and reflections in your email. Enlist HERE.
You can also order the "Let Freedom Ring" book HERE. (Considering ordering some books for family & friends)
An explanation of "Let Freedom Ring" can be found HERE.

August 15 - October 7 - Novena for Our Nation: 54 Day Basic Training in Holiness
This is the "protection & blessing" part of our three month long prayer campaign. This August 15 marks the five-year anniversary when, now, 77,000 special forces prayer warriors "UNITED" as the "United States Grace Force," to seek the intercession and protection of the Blessed Virgin Mary, especially for our nation, with the extremely powerful 54 Day Rosary Novena. We first prayed this in the lead up to the 2016 election, and rejoiced that the radical secular tyranny did not gain power at that time. We have also witnessed countless supernatural miracles through this unbelievably powerful novena.
Enlist in the United States Grace Force to receive all of the daily "Novena for Our Nation" prayers and reflections in your email. Enlist HERE.
You can order the "54 Day Basic Training in Holiness" book for this novena HERE.
An explanation of "54 Day Rosary Novena" can be found HERE. 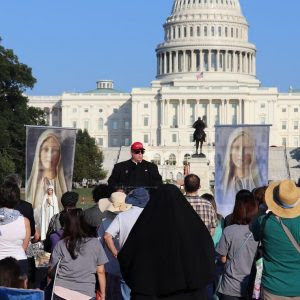 October 10 - Rosary Coast to Coast
Beyond the Holy Alliance we will have formed through our three month prayer campaign (July 7 - October 7), everything will culminate in a "final battle" on Sunday, October 10 in what we call "Rosary Coast to Coast."
Battle Hymn of the Republic
I'll close with one the "original" verses of the "Battle Hymn of the Republic," published in 1862:

Archbishop Fulton Sheen Teaching, "Quo Vadis, America?"
Cardinal Burke Endorsement
Cardinal Burke wholeheartedly endorses this supernatural prayer campaign. Here is an endorsement video he graciously made for us in 2018 (note that this year's Rosary Coast to Coast is on Sunday, October 10)
at July 04, 2021