Malachi, Chapter 3, verse 19-21 19 For the day is coming, blazing like an oven, when all the arrogant and all evildoers will be stubble,...

Mark, Chapter 10, Verse 32
They were on the way, going up to Jerusalem, and Jesus went ahead of them. They were amazed, and those who followed were afraid. Taking the Twelve aside again, he began to tell them what was going to happen to him.

Why were the apostles amazed?[1]

Christ's going on with his undertaking for the salvation of mankind, was, is, and will be, the wonder of all his disciples. Worldly honor is a glittering thing, with which the eyes of Christ's own disciples have many times been dazzled. Our care must be, that we may have wisdom and grace to know how to suffer with him; and we may trust him to provide what the degrees of our glory shall be. Christ shows them that dominion was generally abused in the world. If Jesus would gratify all our desires, it would soon appear that we desire fame or authority, and are unwilling to taste of his cup, or to have his baptism; and should often be ruined by having our prayers answered. But he loves us, and will only give his people what is good for them.

After His death and resurrection, Christ gave His apostles the power to dispel fear via the influence of the Holy Spirit through the imposition of hands on the elect. 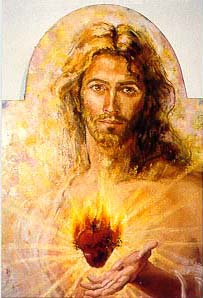 ALTHOUGH many pious souls had been accustomed, in the silence of their secluded lives, to venerate the sacred Heart of Jesus with great devotion, still our divine Savior desired that the boundless love of His Heart might be known by all men, and that a new fire of love should thereby be kindled in the cold hearts of Christians. For this purpose He made use of a frail and little-known instrument in the person of Margaret Mary Alacoque, a nun of the Order of the Visitation, at Parayle-Monial, France. One day, when, according to her custom during the octave of Corpus Christi, she was deeply engaged in devotions before the Blessed Sacrament, the divine Saviour appeared to her, showed her His Heart burning with love, and said: "Behold this Heart, which has so loved men that it has spared nothing, even to exhausting and consuming itself, in order to testify its love. In return I receive from the greater part only ingratitude, by their irreverence and sacrilege, and by the coldness and contempt they have for Me in this sacrament of love. And what is most painful to Me is that they are hearts consecrated to Me. It is for this reason I ask thee that the first Friday after the octave of Corpus Christi be appropriated to a special feast to honor My Heart by communicating on that day and making reparation for the indignity that it has received. And I promise that My Heart shall dilate to pour out abundantly the influences of its love on all that will render it this honor or procure its being rendered. Margaret obeyed, but met everywhere the greatest opposition, until finally, when she became mistress of novices, she succeeded, by the help of her divine Spouse, in animating her young charges to venerate the sacred Heart of Jesus. But this was not sufficient for her zeal. She persevered until she softened the opposition of the nuns, and kindled in all an equal devotion towards the most sacred Heart. Thence the devotion spread to the adjoining dioceses, where confraternities in honor of the most sacred Heart of Jesus soon sprung up. Pope Clement XIII., after having instituted a most rigorous examination of the whole affair, commanded that the feast of the Most Sacred Heart of Jesus should be solemnly celebrated throughout the whole Catholic Church every year, on the first Friday after the octave of Corpus Christi.

The Devotion to the Sacred Heart of Jesus

In the divine Heart of Our Savior we must not imagine an inanimate heart, separated from the person of Christ, but the living heart of the God-Man, the center of all His affections, the fountain of all His virtues, the most touching emblem of His infinite love to man. The Church venerates the cross, the blood, and the wounds of the divine Savior, by feasts which have their proper masses and lessons, in order, by meditation upon these objects, to awaken in us a more fervent devotion to the Redeemer. How much more worthy, then, of our devotion is the sacred Heart of Our Savior, since all its thoughts, movements, and affections aim at our salvation, and it is always ready to receive truly penitent sinners, to pardon them, to restore them again to God s favor, and make them partakers of eternal happiness!

It is, writes the venerable P. Simon Gourdan:

a.       A holy devotion, for therein men venerate in Christ those affections and motions of His Heart by which He sanctified the Church, glorified His Heavenly Father, and showed Himself to men as a perfect example of the most sublime holiness.
b.      An ancient devotion of the Catholic Church, which, instructed by St. Paul, the great apostle, has at all times acknowledged the great beneficence of the divine and sacred Heart of Jesus.
c.       An approved devotion, for the Holy Scriptures everywhere admonish us to renew the heart, by changing our lives; to penetrate it with true sorrow, to inflame it with divine love, and to adorn it by the practice of all virtues. When, therefore, a new heart is promised us, by which to direct our lives, that can be no other than the Heart of Jesus, which is to us the pattern of all excellence, and which we must follow if we would be saved.
d.      A perfect devotion, as being the origin of all other devotions. For the Heart of Jesus is the inexhaustible treasury from which the blessed Mother of God, and all other saints have derived their graces, their virtues, their life, their spiritual goods. Filled first with treasures from this source, different servants of God have instituted and established other devotions.
e.       A profitable devotion, for thereby we have brought before our eyes the very fountain of life and grace, and can draw directly from it, increasing in ourselves all virtues, by adoring this divine Heart, meditating on its holy affections, and endeavoring to imitate them.
f.       A devotion pleasing to God, for thus we adore God, as Christ requires, in spirit and in truth, serving Him inwardly in our hearts, and endeavoring to please Him. Finally it is:
g.      A useful devotion, since its whole object is to unite us most intimately with Christ as members of Him, her head, to make us live by and according to His spirit, to have one heart and soul with Him, and through grace finally to become one with Him, which is and must be the object of all devotions.

As this devotion is, then, so excellent, we cannot sufficiently recommend it to all who are anxious for their salvation. While everyone can practice this devotion, and adore the sacred Heart of Jesus, by himself, there is a greater blessing when pious souls unite and form a confraternity for practicing the devotion. Of such confraternities there were in the year 1726 more than three hundred, and they are now established throughout all Catholic countries. Hesitate not, Christian soul, to engage in this devotion, and to join in the adoration of that sacred Heart of Jesus in which all men find propitiation, the pious, confidence; sinners, hope; the afflicted, consolation; the sick, support; the dying, refuge ; the elect, joy and delight.

An Offering to the Most Sacred Heart of Jesus

Whoever says the following prayer before the image of the most sacred Heart of Jesus, with sincere sorrow for his sins, gains each time an indulgence of one hundred days; and by saying it daily for a month, he can on any one day gain a plenary indulgence, if he makes his confession, receives communion, and prays according to the intention of the Church:

“My loving Jesus, I (N.N.) give Thee my heart; and I consecrate myself wholly to Thee, out of the grateful love I bear Thee, and as reparation for all my unfaithfulness; and with Thy aid I purpose never to sin again.”