Are We in the End Times?

There is much talk about the Antichrist, the Second Coming of Christ, the great Chastisement, and even the end of the world. We were thrilled to have Desmond Birch Join us on the Grace Force. Desmond is considered one of the world's leading experts as has devoted 50 years of his life researching in this area. Desmond Birch is most noted for his historic encyclopedic book, Trial, Tribulation and Triumph (order your copy HERE). In this book, Desmond sifts out the legitimate, credible prophecies from the false and widely scattered body of teachings. Desmond builds this case drawing heavily on sacred scripture and only those revelations and prophesies that have been approved by the Church.

Birch also traveled to Rome to translate ancient writings passed down by the Fathers of the Church contained deep in the Vatican library. Theses prophecies offer a gripped account of how the Antichrist will come to power, and how he will be ultimately defeated.
Recommended by Bishops, Priests, and Theologians alike, Desmond Birch has created nothing short of a masterpiece. Every quotation is documented and every fact thoroughly researched and footnoted. Twenty-three years in the making, Trial, Tribulation and Triumph will soon become the authority on how we view the "End Times." If you're curious about the sequence of events that will surround the end of the world, read this book.
We tap Desmond's magnificent brain on the Grace Force.
DON'T MISS THIS!!  PLEASE SHARE!! 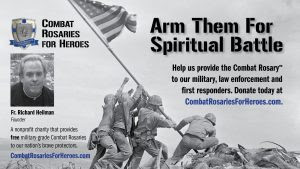 Combat Rosaries for Heroes Inc. will raise funds to provide a free Combat Rosary™ to as many of these heroes as possible. Father Heilman designed the Combat Rosary™ based on the 1916 pull-chain Rosary issued by the U.S. government during World War I. The Rosary is made of steel and features a gunmetal finish. The Combat Rosary™ is carried by the Pontifical Swiss Guard at the Vatican. Each donated Rosary will come with a protective leather zippered case so the sacramental can be easily tucked in a pocket.
Donate at CombatRosariesForHeroes.com. Checks can be sent to P.O. Box 44036, Madison, WI 53744.
Are YOU in?
Support the US Grace Force Podcast
Hello and welcome to the United States Grace Force Podcast!
If you are here than you know about the dangers the Catholic Church faces that our Blessed Mother warned us about and that threaten to corrupt our society.
Our mission here is simple. Bring awareness to these issues and do battle against them.
God commands us to take up arms against the demons that plague us daily. We are in a spiritual battle for our souls and we must not be caught being idle.
If you feel so inclined, you can donate a small amount monthly to help keep us going. Whatever you are able to give would help us greatly to spread this message to more people and recruit spiritual warriors for the fight!
You can go here to support the US Grace Force Podcast: Patreon
Thank you for your donation and let's continue to win the world for God!
More from Fr. Richard Heilman
To follow more of Fr. Richard Heilman's teachings, subscribe to the podcast of his Sunday homilies on Apple Podcasts or Google Play Music, or browse through them on the St. Mary of Pine Bluff Catholic Church web site. Also follow Father's writings on the U.S. Grace Force and Roman Catholic Man web sites.
More from Doug Barry
Follow Doug on his YouTube channel and read more on the Battle Ready web site.
U.S. Grace Force Gear
Official USGF gear can be purchased from the USGF Store, including Combat Rosaries, prayer books, scapular medals, T-shirts, caps, holy water and blessed salt flasks, and the Peace Through Strength Challenge Coin. Check out the USGF collection, powered by Roman Catholic Gear.
at July 15, 2021