The Great Battle for the Triumph: Join us for 9 Days of Prayer, Fasting, Inspirational Talks, and Daily Mass to Change the World! 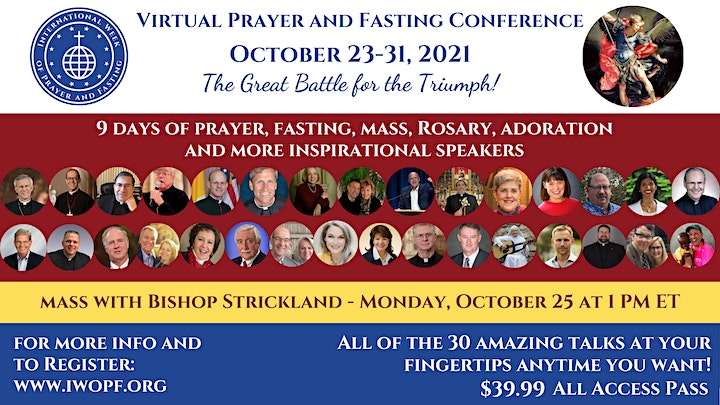 The International Week of Prayer and Fasting Virtual Conference is a grassroots movement of Catholics and Christians from around the world participating in a global network of prayer and fasting.

We are praying and fasting:

6 Why should I FEAR in evil days, with the iniquity of my assailants surrounding me, 7 of those who trust in their wealth and boast of their abundant riches?

Trust in Christ our savior and live the virtues of our Lady: humility, generosity, chastity, patience, temperance and love of fellow man.

Do not put your faith in coin for the bankruptcy of our cultural heart is that we allow the innocent to be killed in this nation. God cries over the sacrifices of future unborn children for the dreams of the mother. No amount of future happiness or gain in freedom is worth the life of an innocent. Know that life is greater than liberty and liberty is greater than wealth.

Beloved: Teach and urge these things. Whoever teaches something different and does not agree with the sound words of our Lord Jesus Christ and the religious teaching is conceited, understanding nothing, and has a morbid disposition for arguments and verbal disputes. From these come envy, rivalry, insults, evil suspicions, and mutual friction among people with corrupted minds, who are deprived of the truth, supposing religion to be a means of gain. Indeed, religion with contentment is a great gain. For we brought nothing into the world, just as we shall not be able to take anything out of it. If we have food and clothing, we shall be content with that. Those who want to be rich are falling into temptation and into a trap and into many foolish and harmful desires, which plunge them into ruin and destruction. For the love of money is the root of all evils, and some people in their desire for it have strayed from the faith and have pierced themselves with many pains. But you, man of God, avoid all this. Instead, pursue righteousness, devotion, faith, love, patience, and gentleness. Compete well for the faith. Lay hold of eternal life, to which you were called when you made the noble confession in the presence of many witnesses. (Tm. 6:2-12)

John McCain in his book “Character is Destiny” points out the work of Viktor Frankl as a man who best portrays the virtue of dignity. Viktor before World War II was a prominent Jewish psychiatrist who lost everything during the Nazi takeover of Germany. The Nazis had taken his freedom, his vocation and everyone he loved. They starved him, beaten him, cursed him and worked him almost beyond human endurance. They had set his life upon a precipice from which at any moment they chose, they could push him as they had pushed thousands. Yet as they drove him out one winter morning into the fields like an animal, striking him, his mind rose above his torment and his tormentors, taking leave of the cruelty to contemplate the image of his wife. He did not know if she was alive or dead, but in his heart, he heard the words of the eighth Song of Solomon; Set me like a seal upon thy heart, love is as strong as death. “My mind clung to my wife’s image, imagining it with uncanny acuteness…Real or not, her look was more luminous than the sun which was beginning to rise…Then I grasped the meaning of the greatest secret that human poetry and human thought and belief have to impart: the salvation of man is through love and in love,” Frankl relates in Man’s Search for Meaning. Throughout his captivity he held on to his love and with his love he kept from his captors the thing they thought they destroyed, the one thing that no human being can take from another, for it can only be surrendered, but not taken: his dignity.

Here are 12 thought-provoking passages from his book:[2]

1.      “Don’t aim at success — the more you aim at it and make it a target, the more you are going to miss it. For success, like happiness, cannot be pursued; it must ensue, and it only does so as the unintended side-effect of one’s personal dedication to a cause greater than oneself, or as the by-product of one’s surrender to a person other than oneself.”

2.      “Everything can be taken from a man but one thing; the last of the human freedoms — to choose one’s attitude in any given set of circumstances.”

3.      “Everyone has his own specific vocation or mission in life to carry out a concrete assignment which demands fulfillment. Therein he cannot be replaced, nor can his life be repeated. Thus, everyone’s task is as unique as is his specific opportunity to implement it.”

4.      “Live as if you were living already for the second time and as if you had acted the first time as wrongly as you are about to act now!”

5.      “The prisoner who had lost his faith in the future — his future — was doomed. With his loss of belief in the future, he also lost his spiritual hold; he let himself decline and became subject to mental and physical decay.”

6.      “I consider it a dangerous misconception of mental hygiene to assume that what man needs in the first place is equilibrium or, as it is called in biology, “homeostasis,” i.e., a tensionless state but rather the striving and struggling for a worthwhile goal, a freely chosen task. What he needs is not the discharge of tension at any cost but the call of a potential meaning waiting to be fulfilled by him.”

7.      “Life ultimately means taking the responsibility to find the right answer to its problems and to fulfill the tasks which it constantly sets for each individual.”

8.      “Man has suffered another loss in his more recent development inasmuch as the traditions which buttressed his behavior are now rapidly diminishing. No instinct tells him what he has to do, and no tradition tells him what he ought to do; sometimes he does not even know what he wishes to do. Instead, he either wishes to do what other people do (conformism) or he does what other people wish him to do (totalitarianism).”

9.      “A man who becomes conscious of the responsibility he bears toward a human being who affectionately waits for him, or to an unfinished work, will never be able to throw away his life. He knows the ‘why’ for his existence, and will be able to bear almost any ‘how.’”

10.  “What matters, therefore, is not the meaning of life in general but rather the specific meaning of a person’s life at a given moment. To put the question in general terms would be comparable to the question posed to a chess champion: “Tell me, Master, what is the best move in the world?” There simply is no such thing as the best or even a good move apart from a particular situation in a game and the particular personality of one’s opponent.”

11.  “When we are no longer able to change a situation — just think of an incurable disease such as an inoperable cancer — we are challenged to change ourselves.”

12. “Freedom, however, is not the last word. Freedom is only part of the story and half of the truth. Freedom is but the negative aspect of the whole phenomenon whose positive aspect is responsibleness. In fact, freedom is in danger of degenerating into mere arbitrariness unless it is lived in terms of responsibleness. That is why I recommend that the Statue of Liberty on the East Coast be supplemented by a Statue of Responsibility on the West Coast.”

This day in 1964 was the premier of the movie, “My Fair Lady.” It is one of my daughter Nicole’s favorite movies. Tonight, watch the movie while enjoying a gin and tonic to up your classiness.

According to the almanac today is a Full Hunters Moon, if you are not a hunter take the children/grandchildren for a hike and camping trip.

·         Unite in the work of the Porters of St. Joseph by joining them in fasting: Today's Fast: For the intercession of the angels and saints