Monday Night At the Movies

The prophecies of First Zechariah can be dated to the late sixth century B.C., contemporary with those of Haggai; the oracles of Second Zechariah are somewhat later. The most striking feature of First Zechariah is a series of visions in which the prophet describes the centrality of Jerusalem, its Temple, and its leaders, who function both in the politics of the region and of the Persian empire and in God’s universal rule. These visions clearly relate to the Temple restoration begun in 520 B.C. The prophet is acutely aware of the devastation that comes from disobedience to God’s word, as had been spoken by God’s prophetic emissaries. Yet, it was now clear in this century after the rebuilding of the Temple and the repatriation of many of the exiles, that Judah would not soon regain political autonomy and a Davidic king. So the various poems, narratives, oracles, and parables of Second Zechariah maintain the hope of previous prophets by depicting a glorious restoration. At that time all nations will recognize Jerusalem’s centrality and acknowledge God’s universal sovereignty.

13 Just as you became a curse among the nations, O house of Judah and house of Israel, so will I save you that you may be a blessing. Do not FEAR; let your hands be strong. 14 Thus says the LORD of hosts: Just as I intended to harm you when your ancestors angered me—says the LORD of hosts—and I did not relent, 15 so again in these days I intend to favor Jerusalem and the house of Judah; do not fear!

As gentiles who are God-fearing, we must accept our salvation by living the Shema Israel daily seeking to love Him with our whole heart, mind, soul and strength (let our hands be strong). This morning as I said the Shema Israel, I thought Lord I don’t understand how to love you with my whole soul but I decided to say the prayer looking in the mirror at myself.  I then said, “Hear O Israel that the Lord our God is one, and you shall love the Lord your God with your whole heart, (I touched my heart) and with your whole mind, (I touched the side of my temple) with your whole soul (I instinctively touched my eyes, which are the windows of the soul) and flexed my arms and said with my whole strength. 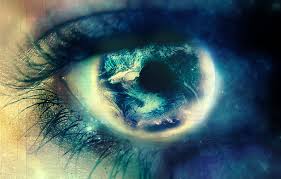 Today reflect on how the Rosary meditations show us how Mary, Jesus and the Holy Spirit show us how to love God with our whole Heart, Mind, Soul and Strength.

107. What we should humbly and fervently ask from God, then, is a deepening of our love for Him with our whole heart. We should ask for this gift because love of God is the only way to God. What rouses us to love God more than the Sacrament of Love, the Eucharist? But as Saint Thomas Aquinas wrote, the mystery of love in the Eucharist is available not to our unaided senses but only to faith: “Sight, touch, taste fail with regard to Thee, but only by hearing does one believe surely; I believe whatever God’s Son said: nothing is truer than the word of Truth”. The Church’s ultimate reason to believe in the Eucharist is because she trusts Jesus. She has faith in her Lord’s words spoken up and down the centuries on the lips of her priests: “This is My Body given up for you”. The Blessed Sacrament is thus the greatest sign given by God to stir up love in the hearts of His people until He comes again. Let us beg God for the grace to be on fire with the divine love which flows from the heart of Christ in the Sacrament of His Body and Blood.

108. My dear sons and daughters in Christ, the Eucharist is the heart of our faith. It is the center of the faith of the Church for it is Christ Himself. All the concrete expressions of Eucharistic faith I mention above represent our humble response to this mystery. If done in trusting surrender to God, they are meant to draw us closer to the eternal wedding banquet to which every Eucharistic celebration is a foretaste. May we never tire of discovering that the Eucharist is the source and summit of Christian life! As from the source of a great river, everything that matters in life flows from it. As to a great mountain peak, all the striving and struggle of life seeks it.

109. For this reason, while we continue this earthly journey towards the eternal Promised Land, we rejoice that the Eucharistic Christ is our protection against powerful currents of selfishness and worldly temptations. In all of his Eucharistic hymns, Aquinas always ends them pointing out the connection between the Eucharist and heaven. In the hymn “Panis Angelicus”, he gives voice to the ultimate desire and longing of every human heart: “We ask You, O God Three and One, to visit us just as we celebrate You; along Your paths, lead us to where we are headed, to the light where You dwell”. He reminds us that the most effective way for us to prepare for eternal life is to seek to be nourished by Jesus in the Eucharist.

PART ONE: THE PROFESSION OF FAITH

SECTION TWO I. THE CREEDS

Article 12 "I BELIEVE IN LIFE EVERLASTING"

VI. Hope of the New Heaven and the New Earth

1042 At the end of time, the Kingdom of God will come in its fullness. After the universal judgment, the righteous will reign for ever with Christ, glorified in body and soul. the universe itself will be renewed:

The Church . . . will receive her perfection only in the glory of heaven, when will come the time of the renewal of all things. At that time, together with the human race, the universe itself, which is so closely related to man and which attains its destiny through him, will be perfectly re-established in Christ.

1043 Sacred Scripture calls this mysterious renewal, which will transform humanity and the world, "new heavens and a new earth." It will be the definitive realization of God's plan to bring under a single head "all things in [Christ], things in heaven and things on earth."

1044 In this new universe, the heavenly Jerusalem, God will have his dwelling among men. "He will wipe away every tear from their eyes, and death shall be no more, neither shall there be mourning nor crying nor pain any more, for the former things have passed away."

1045 For man, this consummation will be the final realization of the unity of the human race, which God willed from creation and of which the pilgrim Church has been "in the nature of sacrament." Those who are united with Christ will form the community of the redeemed, "the holy city" of God, "the Bride, the wife of the Lamb." She will not be wounded any longer by sin, stains, self-love, that destroy or wound the earthly community. The beatific vision, in which God opens himself in an inexhaustible way to the elect, will be the ever-flowing well-spring of happiness, peace, and mutual communion.

1046 For the cosmos, Revelation affirms the profound common destiny of the material world and man:

For the creation waits with eager longing for the revealing of the sons of God . . . in hope because the creation itself will be set free from its bondage to decay.... We know that the whole creation has been groaning in travail together until now; and not only the creation, but we ourselves, who have the first fruits of the Spirit, groan inwardly as we wait for adoption as sons, the redemption of our bodies.

1047 The visible universe, then, is itself destined to be transformed, "so that the world itself, restored to its original state, facing no further obstacles, should be at the service of the just," sharing their glorification in the risen Jesus Christ.

1048 "We know neither the moment of the consummation of the earth and of man, nor the way in which the universe will be transformed. the form of this world, distorted by sin, is passing away, and we are taught that God is preparing a new dwelling and a new earth in which righteousness dwells, in which happiness will fill and surpass all the desires of peace arising in the hearts of men."

1049 "Far from diminishing our concern to develop this earth, the expectancy of a new earth should spur us on, for it is here that the body of a new human family grows, foreshadowing in some way the age which is to come. That is why, although we must be careful to distinguish earthly progress clearly from the increase of the kingdom of Christ, such progress is of vital concern to the kingdom of God, insofar as it can contribute to the better ordering of human society."

1050 "When we have spread on earth the fruits of our nature and our enterprise . . . according to the command of the Lord and in his Spirit, we will find them once again, cleansed this time from the stain of sin, illuminated and transfigured, when Christ presents to his Father an eternal and universal kingdom." God will then be "all in all" in eternal life:

True and subsistent life consists in this: the Father, through the Son and in the Holy Spirit, pouring out his heavenly gifts on all things without exception. Thanks to his mercy, we too, men that we are, have received the inalienable promise of eternal life.

·       Do not fear struggle; courage itself often intimidates temptations, and they dare not attack us. Courage, God is.

·       Unite in the work of the Porters of St. Joseph by joining them in fasting: Reparations for offenses and blasphemies against God and the Blessed Virgin Mary

·       Eat waffles and Pray for the assistance of the Angels